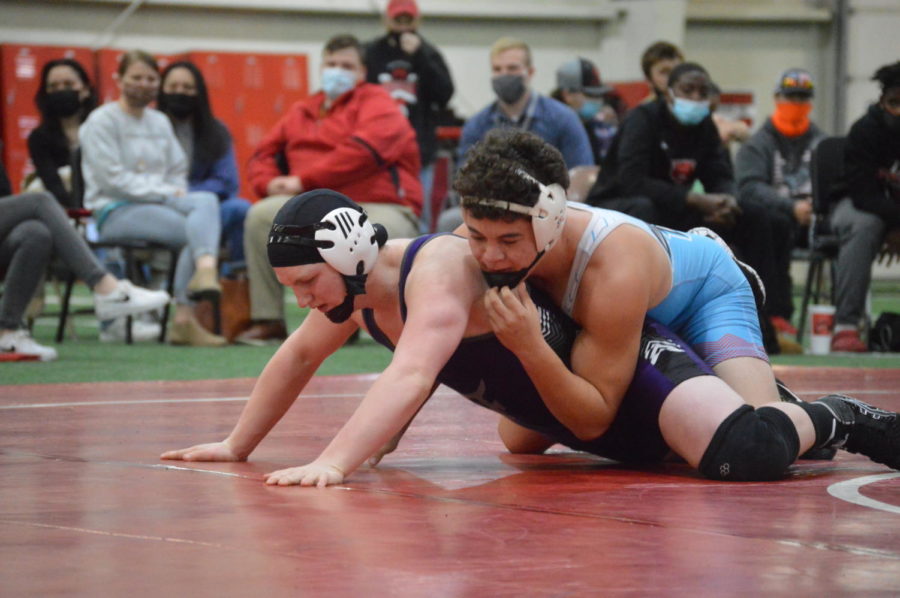 With their season beginning in October, the wrestling team improved significantly topping the record from last year. Junior Tye Lockwood earned a state championship in the 152 weight classification.

“Winning the state championship really felt like all my years of hard work, dedication, sweat, blood and tears really paid off,” Lockwood said.

In a typical match, participants wrestle against other players in their assigned weight ranges. Lockwood grew up wrestling and was exposed to the intricacies of the sport at an early age.

“I got into wrestling from simply being around it since I was born.  My dad was a college wrestler and a coach after, so I’ve grown up around it my whole life,” Lockwood said.

Lockwood credits Southside coaches Rogers and Laroche with helping build the mindset to win the championship.

Lockwood’s normal practices run from Monday to Saturday. Averaging about 2 and a half hours a day, he split his workouts between cardio and wrestling. For the state championship, Lockwood did not change much about these practices. Instead, he focused on facing off against a large variety of opponents in roughly 4 preparatory matches with differing wrestling styles within folkstyle-the form of wrestling used primarily for state.

“Really I just practiced my moves that I never got to use the most in Oklahoma on kids here and started to find a new funky style that worked really well for me,” Lockwood said.

At the state championship, Lockwood faced competition from other Arkansas high schools.

“My toughest opponent was a Springdale kid who dropped down from 170lbs who had a pretty strong left club, but I found a way to use that strength against him and pass him by me to attack his legs to get him to the mat,” Lockwood said.

Lockwood remains especially proud of his assessments of the different situations he was put in in each match. He believes his skills in analyzing his opponents created the opportunity for him to win. However, he wishes he had worked harder to maintain his stamina throughout his matches.

With his wrestling career ending, Lockwood wants to use the lessons wrestling has taught him throughout his everyday life and in his future endeavors.

“Wrestling teaches you a lot of life lessons about hard work, and how everything can’t always go your way but with that you got to make the best out of every situation you’re given and make gold out of glitter,” Lockwood said.