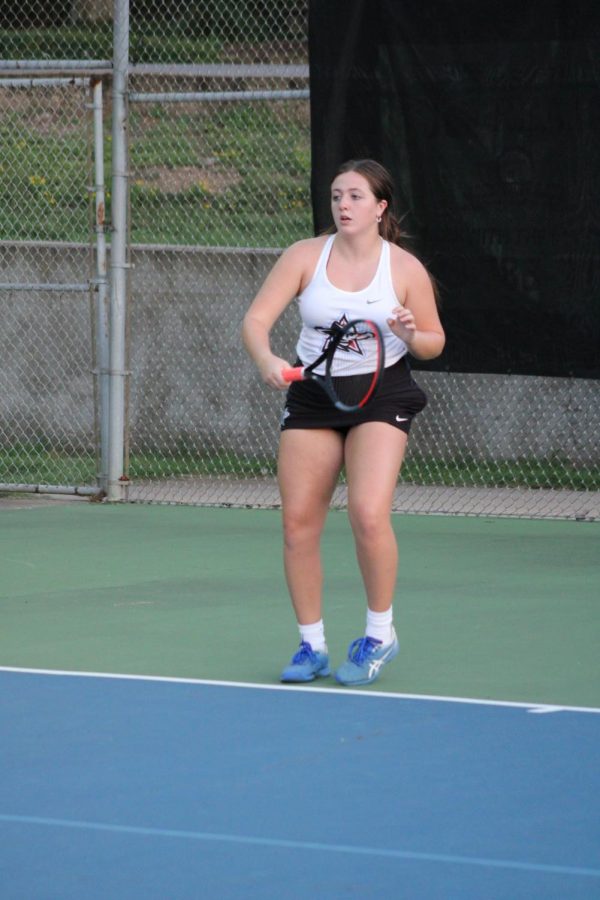 Annie Nelligan in position to play at tennis match against Northside

Although athletes made adjustments due to COVID, senior tennis player Annie Nelligan made significant changes, but ironically, none due to the virus. In her sophomore year, Nelligan achieved the title of number two in doubles tennis with her partner Abby Harris. Then, in her junior year, she claimed the number one spot in doubles and won first in doubles in conference with Jordan Cormier. Two weeks before her senior season, Nelligan was moved to singles.

“I’m playing number two singles and at first I was kind of upset. I was like, I want the number one spot. But the girl who was in front of me, Cate Cole, she totally deserved it. And, we’re both doing really well; and, our positions are working out really well so we’re really happy with it,” Nelligan said.

To ensure a high performance level with her new singles spot, Nelligan practices both on the school team and individually with private coaches.

“In the summers we had morning practices and those were about two hours long but now since school started we usually just practice for maybe an hour or an hour and a half at the end of the day, and then of course I do my own training on the side,” Nelligan said.

While Nelligan, a three year member of the varsity tennis team, wants to win a position at conference and get scouted by a college, her main goal for the 2020 tennis year remains having fun with her teammates.

“I just want everybody to have a really good time because it’s my last year here. And, we also have some sophomores on the team that I am friends with, and have grown up playing tennis with so I’m really excited to have them here. They’re better than I am so we’re excited to get some new people and get to play with them,” Nelligan said.

Although Nelligan continues to achieve top rankings on the court, she furthers her tennis career off the court as well. Nelligan works with Creekmore and Hardscrabble Country Club to mentor and coach young athletes. Introduced to the coaching position by her own high school coaches, Nelligan primarily mentors children under the age of thirteen.

“In my sophomore year, the tennis coaches, Greg and Braeden, reached out and asked me if I wanted to start helping them coach; and, they kind of gave me a start in that. First, I used to get service hours but now I get paid for it,” Nelligan said.

Despite not knowing where she wants to go for college, Nelligan decided to major in education for college. This decision was heavily influenced by her coaching experience and how much she liked working with the children for the past three years.

“Tennis and coaching helped me find my major, education. Tennis is just something that’s super fun and has kept me active and occupied throughout the years. I’ve enjoyed it a lot and look forward to what’s to come,” Nelligan said