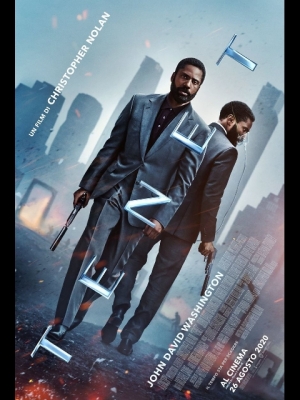 Strange, convoluted, and intriguing, Tenet, released on Sept. 3, stars Robert Pattinson, Elizabeth Debicki, John David Washington, and Kenneth Branagh and elaborates on time, and plutonium bullets, as it inverts or is reversed chronologically.

Tenet goes against the grain and leaves the audience begging for more with its timeless mystery. The cryptic protagonist teams up with his charismatic handler, Neil, to protect the world and to rescue an SOL, fiery art auctioneer, the villain´s estranged wife. The Protagonist and Neil move backward, desperately trying to change the cataclysmic fate of the human race from an overload who communicates with the future, Andrei.

Tenet blends all standard genres by tackling common ground to mesmerize the audience because everything, including the cunning waves, moves in reverse and cleverly rewinds the end result before it happens. Reality paints its canvas into an illusion possessing two sides to every person, place, thing, or idea.

With a uniquely fluid directing style as crisp and bohemian as it´s story, Tenet masterfully manifests as the black sheep in the mind-inverting Chris Nolan cannon, even more than the dream within the dream theme of Inception, and gracefully confuses the audience — visually appealing and immersive to a buzz-worthy, memorable extent.

Perhaps only time knows how to invert the identity of the real protagonist of the Tenet secret mission. If the viewer wants their mind blown, ahem, inverted, they must give Tenet a watch to put today’s pandemic on hold.