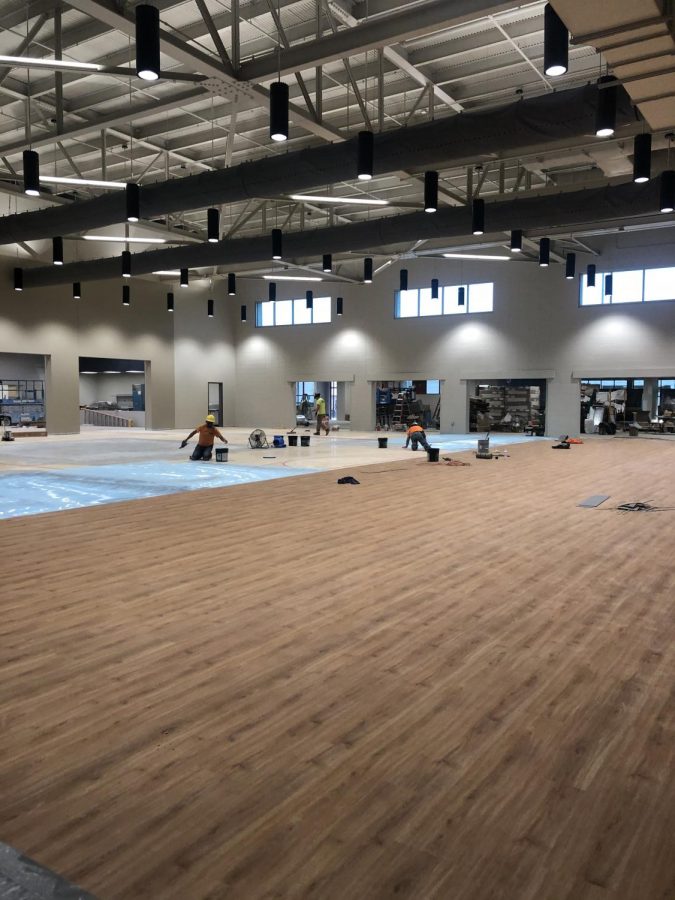 Campus construction started in fall, 2019. Now, over a year and a half later, modifying areas such as the cafeteria, gym, main hall, and main entrance of the building and creating completely new structures such as freshman centers, coffee shops, and gyms, construction continues.

“We were planning on finishing the cafeteria in the fall semester of 2020 but when COVID hit we transitioned, and they really started focusing on getting us these classrooms, because you really needed the classroom space this year, it took resources away from the cafeteria project,” assistant principal Jeff Prewitt said

Located as a branch off of the North Hall, one new area combines STAR Academy, a self-paced learning area, with office spaces for the assistant principals. This new addition, which opened early in fall 2020, allows students who utilize it to have ample space to adhere to COVID guidelines. Another new addition students can get ready to utilize soon is the cafeteria.

“I think the new cafeteria is pretty nice. It’s nice to sit inside with the recent weather being so cold. It’s just convenient,” junior, JD Kwo said

The new cafeteria, The Commons,  brings features such as new seating, much like a common area, for students to relax in, new food lines that create more choices for school lunches, and large windows that allow students to see outside. While the cafeteria opens at the beginning of the spring semester, across the hall, the media center remains under construction.

“The media center is going to take a little longer to finish than the cafeteria but when it is finished, it’ll be where the old administration area used to be and then it’ll extend upstairs as well,” Prewitt said

On top of added space, The media center boasts a fully functioning coffee shop operated by the small business operations class. When open to students, the coffee shop promises a common space with tables available for students to sit at before or after school and during lunch. The media center also brings learning stairs-a feature becoming increasingly common in educational institutions-which are enlarged staircases on which students can sit and work.

“I really like the new media center and I’m excited to see how it turns out. I think the coffee shop is going to be great. I think the freshmen center is going to be a great addition also. If I were an incoming freshman I would have loved to be on the campus of the high school instead of at the junior high. It feels like it’s now an authentic high school with all four grades here,” sophomore Patrick Mush said

Despite being similar in all of the amenities that the rest of the campus possesses, the Freshman Center remains only open to freshmen. Although upperclassmen will be allowed to transition through their common areas and hallways to reach their classes, they won’t be allowed to linger or spend time there. This gives younger students space away from their upperclassmen counterparts to be more comfortable, thus quelling any concern that freshmen were too young to be in the building with seniors. Distress over the freshman center was not the only area that was addressed, school student body safety became another area where construction quelled concern.

“As far as the concerns for how accessible Southside is to outside people go, most of the construction like the freshman center, should block off the main entryways for non-attending people,” assistant principal Prewitt said

Construction plans include securing the west entryways by building the freshman center and putting locks on the doors. Plans also include the installation of decorative fencing, similar to the fencing near the activity center, near the storm shelter. These fences, along with ID scanning entry for teachers and administrators, and time-locked doors are just a few things students and faculty can expect within the next year.